At the Mas de Bellevue above Lunel to the north

I've nearly begun this post several times over the summer.  I do so now in memory of my recently deceased friend Alan Byars, married to Mary's cousin Barbara.  Although he made his money from another liquid, oil, this larger than life Texan shared my interest in wine and encouraged me to revive this blog when we met over good glasses whether in New Mexico or the Rhône valley.  He was an atypical American, (many I know don't even have passports) having lived and worked in Europe as well as in the US, and he and Barbara shared many holidays with us in England and in France as well as America. 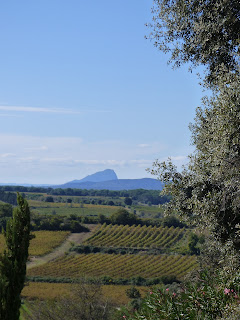 Last time I wrote of our winter excursions into Spanish wines, and we have continued to enjoy the fruits of  our discovery of the Barcelona wine merchant Decántalo whose deliveries and service are very good.  Now I want to write a little about more local wines, which of course have been at the heart of our enjoyment of wine since our first excursions to France in the 1990s.   Our most recent discovery has been a wine truck, a motorised market stall that turns up at markets and evening events in Lunel and other local towns.  It's based near the Pic Saint Loup, one of our best-known local appellations, which can be seen (as here from the Mas de Bellevue) on the horizon from many places around here, and it's called Dégustez Sud, run by a nice couple who spend a lot of time picking out good wines from small producers across the area from Spanish border to the Rhône.  The wines are not necessarily cheap, but this is largely because smaller producers have higher overheads than larger-scale winemakers.

So far we have tried two whites, Folio, a grenache gris from Collioure near the Spanish border and a Mas d'Amile terret blanc, neither cheap but both out of the ordinary and enjoyable.  White wines can be more expensive than run-of-the-mill reds despite the generally shorter making time, because the process has to be cleaner and more temperature controlled.

Pleasant evening outings into Lunel to try wines from Dégustez Sud, the second with oysters for Mary!

Terret used to be a grape only used for fortified apéritif wines like Noilly Prat, but recently some delicious dry white wines have been made from this grape, and one from the Domaine de la Fadèze near Mèze has long been one of our favourites.  Interestingly, in a comparative tasting of that and the Amile wine the other day, we both preferred the cleaner, lemony Fadèze to the more recent discovery, and it has the benefit of being less than a third of the price, but that may be partly because we go to the producers for the Fadèze.  They make a range of red, white and rosé single-variety wines, all at very good prices.

I'm ending with a few of the labels of recently enjoyed wines - 2 from the Rhône valley, a 10-year-old Beaumes de Venise from the left bank of the Rhône, in perfect condition from Durban, one of the first producers we visited there and the other from the right bank, the newere additions to the Rhône area in the Gard, in fact near the Pont du Gard and so named Domaine de l'Aqueduc.   And 2 from the Rive droite of the Garonne, one of the good sweet wines opposite the great Sauternes châteaux, and a very good Entre Deux Mers white from our good friend Jérôme whom we met recently in the Drôme, another proof that good white wines can keep for several years. 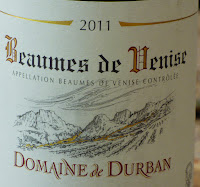 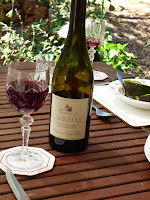 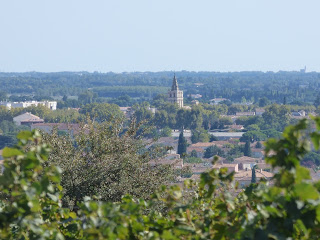