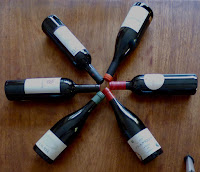 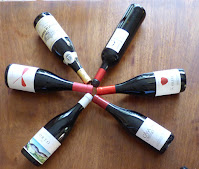 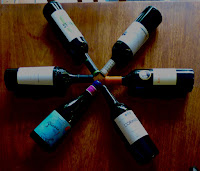 My encounters with Spanish wines go back to my teens, when my father returned from holiday in Spain (with my mum of course, but I’m not sure if Pam and/or Tom went too) lugging on the train 12 bottles of Rioja.  We have carried many bottles in our car over the years, but on the train with all the suitcases too…  Only my Dad!

More recently it all started in the autumn when Mary sighed that she missed Fino sherry, and we both recalled our love of PX (short for Pedro Ximenes, a grape variety used for sweet fortified wines in southern Spain, and so used in blends with drier wines to make the ubiquitous 'cream sherries' well-known in the UK).  We first encountered 100% PX 20 years ago at Rick Stein’s Padstow restaurant when the dessert was simply vanilla ice cream with a schooner of PX poured over.

So I hunted idly to try and satisfy Mary’s craving and came across the Barcelona wine merchant Decántalo .  They specialise in Spanish wines but a quick scan shows they have plenty from other countries too – it seems to me to be as reliable and well-organised as the UK Wine Society with the advantage for us that it is just down the road, not in what we have now sadly to think of as a foreign country!

On top of this, this wine merchant packs things in super-safe cartons – we've had one or two disasters with breakages in the past, but bottles really have a hard time getting broken in these deliveries.  We began before Christmas with Tio Pepe Palomino Fino and Gonzalez Byass Nectar PX, plus a couple of  unfortified wines.  One of the first of these we tried was Protos Clarete, a light red or dark pink from Ribera de Duero, an area now quite well-known, top centre/north Spain a bit SW of Rioja.  This reminds me of the light red clairet which is produced in Bordeaux and whose name of course links to the red clarets from there we all know and love.  But the dark pink, or light red, style is distinct there as it turns out to be in Spain.

We also tried 3 Muga Riojas (red, white and rosé), all of them very good – a friend who knows this whole field well says white Rioja is hard to find, and remembering Dad’s samples I was really interested in this – Oz Clarke says white Rioja is a bit of an afterthought, but we have really liked this Muga, so still have some bottles to enjoy!   We then spotted a Christmas offer of 18 different wines, all red,

·         6  from Priorat (wines and makers include Ferrer Bobet Vinyes Velles, Salanques, Laurel, Mas d'en Compte Negre, Planetes de Nin, and Coma Vella) – we are halfway through these and have been so impressed by the  Ferrer Bobet that we have spent a small fortune on some of these bottles to lay down for the next few years;

·         and 6 other reds, 3 from Montsant: (Fredi Torres Lectores Vini Montsant; Sindicat La Figuera; and Orto - we shared the  Figuera wine with friends yesterday and were very impressed), another Rioja: (Diez-Caballero Crianza 2018) and two from further south (Jumilla - SE Spain N of Murcia: Casa Castillo; and from Valencia: Parotet Vermell)

In the huge country of Spain and its many contrasting wine areas, I was surprised to find that two of these 3 appellations are tucked into a tiny hilly area SW of Barcelona:

Priorat,  which according to Hugh Johnson's pocket guide produces some of Spain’s finest wines. It's named after a former monastery tucked under craggy cliffs. The key is the slate soil – known as llicorella.

Montsant, tucked in around Priorat

The thing to look forward to is a trip to these areas of Spain, relatively close to us although the travel complexities of travel with Covid, national restrictions and of course Brexit remain to be discovered!