One of our first ports of call when we began regular visits to France over 25 years ago was to the southern Rhône valley, the south of the Drôme département (south that is, of our old twin town, Die).  This September we were back in the Vaucluse for a short overnight stay on my birthday.  The photo above is from the road approaching the Domaine de Coyeux, high above Beaumes de Venise, with Mont Ventoux in the distance.  Try as I might I could not convey the height and scale of this well-known obstacle in many Tours de France, but it is often there in views of the area.

When we first visited in the mid-1990s the only way to approach Coyeux was via an unmade road, snaking across the top of the Dentelles de Montmirail, itself already a worrying distance from civilisation.  We've visited the Domaine de Durban, on the road towards Coyeux, quite often over the years, but now that track is closed and the road to Coyeux snakes up the hillside like a Tour de France special, until you arrive on the high plateau with the lace-like rocks that give the Dentelles their name, at closer quarters.

When we first came in the 90s, Beaumes de Venise was well-known for its sweet muscat wines, as it still is, but in the past 20 years sweet wines have become less popular and the reds from this village have become increasingly good and, compared with the neighbouring Gigondas or Vacqueyras, let along Châteauneuf du Pape, very good value.  Coyeux is noted this year in the Guide Hachette for an excellent red, Praestans, which fulfilled our expectations when we tasted it.  We also fell for dry white and rosé wines from Muscat grapes - a very worthwhile visit with views to match. 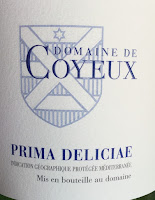 All the white and rosé wines we tried at Coyeux were made from muscat petit grains grapes, the same as are used to make the fortified Muscat de Beaumes de Venise.  When we firt came, dry wines were only made when the harvest was plentiful enough.  Now, dry white wines are increasingly normal, and I was surprised to discover rosé made from the same grape (this is not really surprising - the skins are reddish though the juice is 'white', so leaving ths skins in contact with the juice for a short time makes a nice pale rosé).  Mary is always pleased to find dry muscat, and the Coyeux rosé and white were both excellent.  We also have more and more dry muscat around us in Lunel, and one of our best winemakers tells us he decreases the sugar content of even his sweet wines year by year as people's tastes change.

As we often do when travelling in France, we chose to stay in a Logis de France hotel - almost always with good restaurants attached.  This one in Sablet, the Domaine de Cabasse, lived up to the usual good standards and is as its name suggests also attached to a wine domaine.  However, with so many good wines around we didn't buy here this time - just drank some of their good red with our meal.  The pool was also a welcome attraction in the afternoon heat. 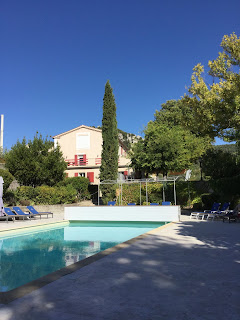 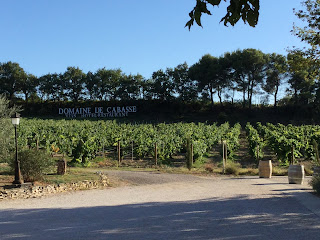 The hotel is among the vines midway between the small sleepy villages of Sablet and Séguret.
As you emerge onto the little road, across the fields you can see two huge buildings typical of the caves coopératives you come across right across the south of France, but if possible even bigger.  This I guessed, rightly, was the Gravillas Coop which we were aiming for after our night in the hotel.  It has a good reputation, and a Rosé in particular which got outstanding marks in the latest Guide Hachette.  The previous afternoon we'd stopped in another small sleepy village, Violès, on the plain between the Rhône and the Dentelles.  There we visited a charming family-run domaine, the Bastide Saint Vincent, another Hachette recommendation, whose red Florentin is a splendid example of the newish 'Plan de Dieu' (plain of God, I guess) Côtes du Rhône Villages appellation. 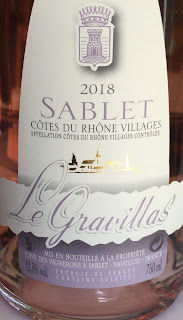 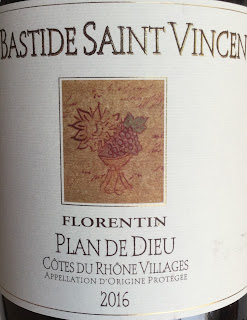 The story of our link to Violès also goes right back to our twinning visits 25 years ago.  At that time our local organic shop in Derbyshire had branched out into wines, and had a nice red Côtes du Rhône and we decided to see if we could find the producer.  At that time Violès was even more of a backwater than it is now - small, dusty and not really used to tourists, but we found the winemaker, bought some wine and had a meal in the little restaurant at the village crossroads.  The raising of quality and acquisition of the plan de Dieu tag has brought new fortune to Violès, which now has more commerce, several well-set-up winemakers and a beautiful new public library among other things.  All very enouraging

To finish here are a few photos of the area, taken on the top of the Dentelles but a little further south and west around the Domaine de Durban, with some better views of Mont Ventoux too 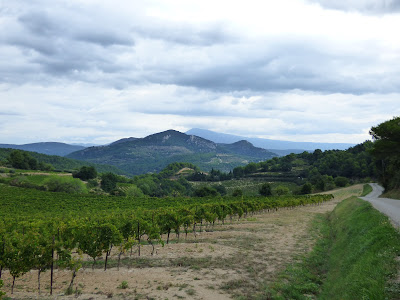 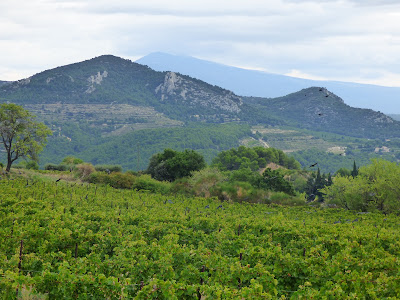